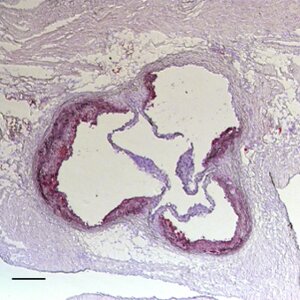 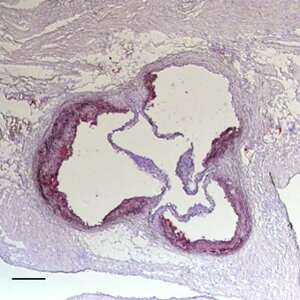 Medical researchers at Ludwig-Maximilians-Universitaet (LMU) in Munich have uncovered how signal proteins of the immune system regulate the development of atherosclerosis.

Atherosclerosis is one of the most common causes of death in Germany. The condition is characterized by the buildup of cholesterol and other fatty metabolites in the arterial wall directly below the endothelial cell layer, which is in direct contact with the bloodstream. This process results in constriction of the artery, which obstructs blood flow and can trigger heart attacks and strokes. Atherosclerosis is generally treated with drugs that reduce the concentration of lipids in the circulation, often using compounds called statins. However, statins effectively reduce the risk of cardiovascular disease in only 35 to 40% of the patients treated. The remaining 60% fail to respond to the medication. This has prompted the search for other drug targets. Since atherosclerosis is linked to chronic inflammatory processes, the immune system might offer new therapeutic options for tackling the disease. A group of researchers led by Professor Esther Lutgens and Dr. Dorothee Atzler at the LMU Medical Center have now elucidated an important component of the immune reaction involved in atherogenesis.

Immunotherapy as a treatment for atherosclerosis

Lutgens and her team at the Institute for Cardiovascular Prevention (Director: Prof. Dr. Christian Weber) and at the University of Amsterdam have now shown that the interaction between proteins called CD40L and CD40 represents a promising drug target for the suppression of atherosclerosis. The protein CD40L is synthesized by and expressed on the surface of specialized cells of the immune system. It is recognized by the CD40 protein, a membrane-bound receptor that is expressed on antigen-presenting cells. However, CD40L also binds to receptors on other cell types that have diverse physiological functions. Using a mouse model, the LMU researchers deleted the gene for CD40L specifically in T cells and platelets as well as its counterpart, CD40, on dendritic cells. They then crossed these mice with a strain that is particularly prone to develop atherosclerosis.

Secretion of interferon-gamma by T-cells is known to stimulate immune functions, but the CD40L-deficient T-cells were found to secrete less interferon-gamma than those in which the gene is intact. In addition, further experiments indeed showed that in the absence of CD40L in T-cells, the atherosclerotic plaques that formed were smaller and more stable. This suggests that inhibition of CD40L could enhance the stability of atherosclerotic plaques, and thus reduce the incidence of heart attacks induced by the rupture of blood vessels.

Similar results were obtained in a mouse strain that was unable to produce CD40 in dendritic cells. Deletion of CD40L in platelets, on the other hand, had no effect on the incidence of atherosclerosis, but it was associated with a reduction in atherosclerosis-associated clot formation.