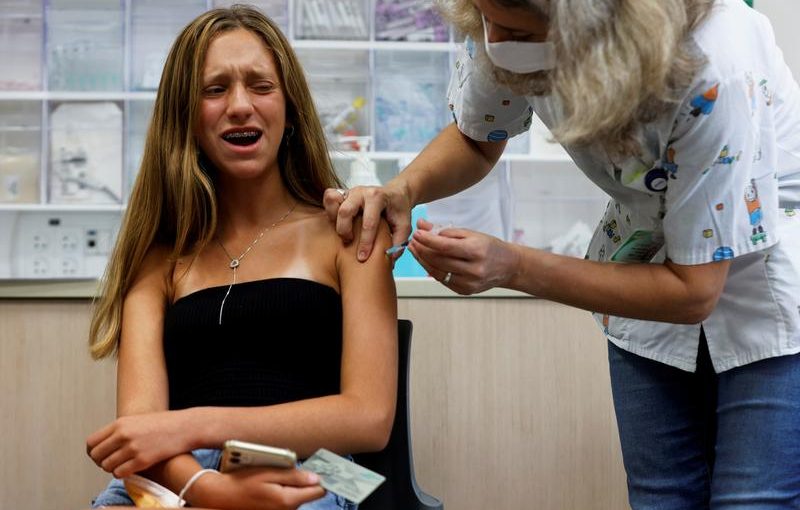 (Reuters) – The daily pace of COVID vaccinations has increased in about a dozen countries due to the arrival of the more contagious Delta variant and governments expanding their vaccination drives, a data analysis by Reuters found.

FILE PHOTO: FILE PHOTO: A teenager reacts while receiving a dose of a vaccine against the coronavirus disease (COVID-19) at a Clalit healthcare maintenance organisation in Tel Aviv, Israel June 21, 2021. REUTERS/Amir Cohen

Israel’s rate of vaccinations has seen a sharp pickup. The Netherlands, Norway, Portugal, Saudi Arabia, Singapore and Spain are all vaccinating at their fastest speed to date. Belgium, Denmark, Finland and Sweden are not far behind.

But it is a different story in the United States. At its current, declining pace, 70% of the U.S. population will not receive a first dose of vaccine until Dec. 1, according to the Reuters analysis of Our World in Data vaccination figures here.

At the current pace, Canada, Chile, the United Kingdom, and eight others will reach that benchmark before the end of the month. And if the current pace is maintained, five more countries will hit 70% by the end of August. Those dates could change depending on many factors, including approvals to vaccinate younger children. (Graphic on vaccinations) tmsnrt.rs/2TbE5vy

In Israel the vaccination rate had plateaued in April as new COVID infections were on a months-long steady decline. But when the arrival of Delta brought a spike of cases in June, the government jumped in quickly with a new campaign urging teenagers to get the shot and parents to vaccinate their children aged 12 to 15.

In many countries, vaccination drives slowed before reaching 70% or more of the population – a threshold some experts say could help largely curb COVID-19 transmission through so-called herd immunity, when combined with people who developed immunity following an infection. (Graphic on global vaccinations) tmsnrt.rs/3tUM8ta

The ability of the coronavirus to mutate quickly into new variants, such as Delta, that reduce the effectiveness of vaccines has cast doubt on whether herd immunity can be achieved. However, various governments have still set national vaccination goals close to that number to encourage citizens to get inoculated. The European Union, for instance, has distributed enough vaccines for 70% of its population.

In some places, regulators have just recently authorized use of the shots in 12 to 15 year olds; in others, supply is catching up with demand.

Many of those countries had initially focused on giving shots to older populations and other high-risk groups. The Pfizer/BioNTech vaccine has been authorized by the U.S. and European Union for people aged 12 and over, but others such as AstraZeneca are only available to adults.

With the spread of the Delta variant, countries are trying to reignite their campaigns by overcoming skepticism about the vaccine and misconceptions that the young do not need a shot.

Heidi Larson, director of the international Vaccine Confidence Project and a professor at the London School of Hygiene and Tropical Medicine, said a rise in vaccinations due to Delta variant concerns may have been held back by changes seen as signalling an end to the pandemic, such as lifting mask mandates and travel bans.

“We’re giving a lot of mixed messages right now,” Larson said. Israel is an exception, she said. It has reimposed measures such as requiring mask use indoors.

While a decline in vaccination rates is to be expected, it has created pockets where groups including children, the elderly and homeless remain at risk, experts say.

“A deceleration of vaccination in itself is a logical phenomenon,” said Vincent Marechal, a senior virologist with France’s Sorbonne University. But slowing down too early opens the door to the virus spreading – mostly among children – and evolving to become more dangerous for them.

Portugal, where the Delta variant accounts for more than 90% of cases, has the highest number of new cases in the European Unions since mid-June. It has also doubled its pace of vaccinations from a low of around 60,000 inoculations per day, in part by including 18 to 29 year olds. (Graphic on global cases) tmsnrt.rs/34pvUyi

In Singapore, the rate of vaccinations has recently gone up after opening its vaccination program to people aged 12 to 39 years old. It also hastened the delivery of vaccine supplies to help it accelerate the rollout.

In Britain, where 87% of adults have received at least one dose of COVID-19 vaccine, the government stepped up its target to have all adults vaccinated by July 19, when its COVID restrictions are slated to be lifted. It has begun giving second shots sooner as well to fight the Delta variant.

In France, where 53.3% of the adult population has received one dose of a vaccine and 41.3% two doses or a single-dose shot, authorities are ramping up outreach to those who have not made vaccination appointments.

“We are indeed hitting a glass ceiling and trying to come up every day with ideas, and the good news is we are seeing a very recent pick up in bookings,” a source close to the health ministry said last week.

The source added the government was still hoping to see 40 million of adults receive a first dose by the end of August versus 35.9 million as of July 12.

France is about to open temporary vaccination centres at cultural venues across the country such as in Avignon, home to a world-famous theatre festival, and vaccination buses will tour the Bordeaux wine region of Gironde to catch seasonal workers.

COVID-19 jabs will be mandatory for France’s health workers and anyone wanting to get into a cinema or board a train will soon need to show proof of vaccination or a negative test under new rules announced by President Emmanuel Macron on Monday.

In the United States, where young people have been eligible since April, vaccinations are stagnant. The Biden administration missed its goal of 70% of adults having had at least one COVID-19 shot by July 4 and has struggled to reach 50% fully vaccinated even as it has warned of outbreaks due to the Delta variant.

Younger people have lagged older ones in seeking vaccines while shots among Black and Hispanic Americans have trailed those of Asian and white Americans, according to data from the Centers for Disease Control and Prevention.

“Whether governments throw in incentives or coercive measures, there is no magical solution,” said Martin Blachier, an epidemiologist with Paris-based healthcare data analysis firm Public Health Expertise. “Some will just not get the vaccine.”