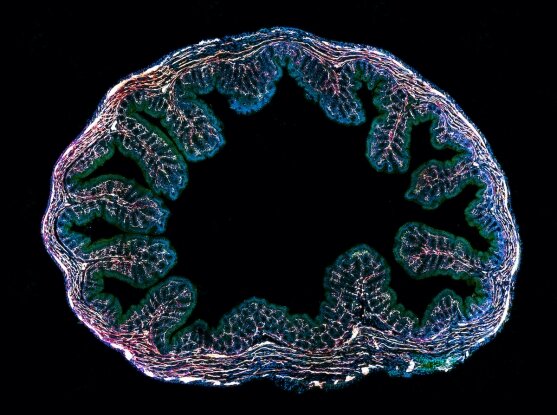 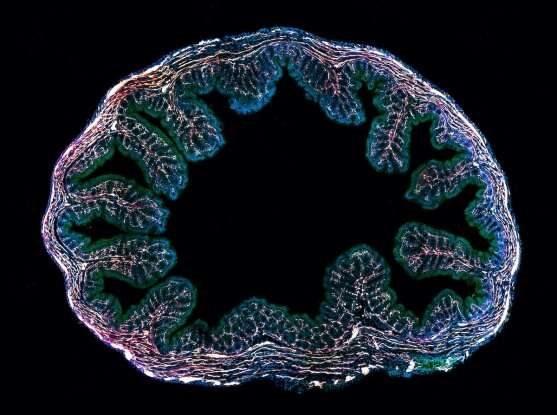 Embedded throughout the gastrointestinal system is an extensive array of neurons that coordinates nearly all activities involved in digestion, gut motility, and response to noxious stimuli. These cells make up the enteric nervous system (ENS) and transmit signals from the gut to the brain, but are rare and fragile, making them difficult to isolate and study.

A team led by researchers at the Broad Institute of MIT and Harvard and Massachusetts General Hospital has now overcome these challenges with new methods that they developed to generate a single-cell map of the ENS in humans and mice.

By analyzing gene activity in these individual neurons, the scientists infer that neurons in the gut are communicating with a variety of other cell types, including immune cells. They also found that key genes associated with disease are expressed in these cells.

The findings suggest that the ENS is a central hub linking the intestinal, immune, and central nervous systems, and plays an important role in allergic, inflammatory, and motility disorders of the gut, as well as diseases affecting the brain.

Studying these kinds of neuro-immune interactions is the next phase of the Food Allergy Science Initiative—a multi-institution research collaboration, housed at Broad, that seeks to understand the biological basis of food allergies and encourage the development of new treatments. The initiative helped support the new study.

“By learning what’s happening in the ENS, we can better understand how the system communicates with epithelial, immune, and other cells, and generate new ways to treat dysfunction within the whole system,” said Broad core institute member Ramnik Xavier, co-senior author of the study, director of the Immunology Program and co-director of the Infectious Disease and Microbiome Program at Broad, investigator at Massachusetts General Hospital, and Kurt Isselbacher Professor of Medicine at Harvard Medical School.

The work appears this week in Cell, led by co-first authors Eugene Drokhlyansky, Christopher Smillie, and Nicholas Van Wittenberghe of the Klarman Cell Observatory (KCO) at the Broad Institute.

Studying enteric neurons has been challenging partly because they are rare, fragile, and challenging to isolate from surrounding tissue.

To overcome these obstacles, the team devised two new methods to study the ENS in mice and humans at single-cell resolution: RAISIN RNA-seq and MIRACL-seq. RAISIN (Ribosomes And Intact Single Nucleus) RNA-seq is a laboratory protocol for isolating individual cells that preserves both the cell nuclei and their attached ribosomes (the cell’s protein-making machinery), providing a more comprehensive look at the RNA within the cell. MIRACL-Seq (Mining Rare Cells) then enables researchers to more efficiently search for rare cell types and collect them after dissociating a complex tissue sample.

Together, these techniques enabled the team to profile 5,068 mouse and 1,445 human enteric neurons, as well as diverse gut cell types from both species. Researchers can apply these methods to fresh and frozen tissue specimens, and could use the techniques to profile rare cell types in a range of tissues beyond the intestine.

“The creativity and persistence of our team in developing these new techniques has allowed us to build and validate a comprehensive picture of the enteric nervous system, in both mice and humans,” said co-senior author Orit Rozenblatt-Rosen, Broad’s senior director of single cell genomics and scientific director of the KCO. “These data will allow us to better understand the roles of the enteric nervous system in a variety of diseases, and pinpoint the cell types where genetic risk factors for these diseases act.”

The team’s analysis revealed dozens of distinct subsets of neurons in the enteric nervous system and showed that the composition of the cells and their gene expression varied by anatomical region of the gut, age, and even time of day when the sample was taken.

The data also suggest multiple new circuits between different subtypes of neurons and surrounding cells. The connections found between the enteric neurons and the immune system could help guide future study of how the nervous system might be involved in gastrointestinal disease, and why certain diseases of the central nervous system, such as autism spectrum disorder and Parkinson’s disease, have gut dysfunction as an early symptom.

Xavier says studying these enteric neurons could yield new insight into irritable bowel syndrome, allergic disorders of the gut, and unexplained enteric neuropathy (impairment or degradation of the nerves in the digestive system).