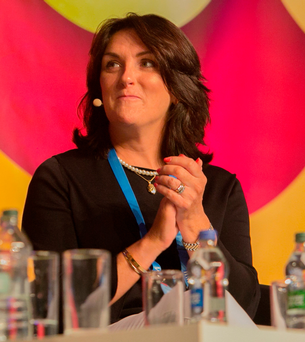 Anthony Foley’s widow Olive has opened up about the struggle her children faced dealing with his death but said that after receiving counselling they are finally beginning to recover.

Olive Foley said that conversing with her children about their father’s death was difficult but counselling has helped them to open up and the family are now recuperating mentally.

Speaking to Marian Finucane on her weekly RTE Radio 1 show, Mrs Foley recounted the despondent days that followed her husband’s untimely death and how she sought help in how to assist her children in dealing with the tragedy. After consulting psychologist David Coleman, he convinced her not to shelter her children as was her instinct.

“The news was the most shocking thing imaginable. It was the last thing in the world I ever expected,” she recalled. “That morning I had gone into a state of shock. My instinct would have been, ‘Let’s protect the children. We’ll hide them away until the sorry affair is over’. The following morning I needed some help, so I rang David and I said ‘David, just talk to me and tell me what I need to do here now’.

“He gave me the best advice. He said; if you are going to Paris, bring the children with you. Let him [Anthony] spend as much time as you can with the children’. We were going to lay Anthony out at home and they spent the two full days with him at home and it was lovely. It’s something that I’m so happy that I got the advice on because definitely I wouldn’t have exposed them that much to him at all and I just think that it’s such a lovely thing now that we have done that.”

Mrs Foley also took on board another piece of Mr Coleman’s advice; to be straightforward and honest with her children.

“The other thing is tell them everything. You have to be so honest with them because if you lose their trust, if you hide one thing from them, what they will come up with in their head if you haven’t told them the truth will be far worse. Far worse things will pop into their heads, so I was completely honest and open with them from the very start.

“On Sunday I had to break the news to them. It was a very hectic day, a very busy day. I had about two minutes to get my thoughts together before I had to tell them. I knew that you have to say it very straight to children. I didn’t mention that he passed or that we lost him, I was able to use the words that Daddy died in his sleep.

“Anthony was an idol to many without a shadow of doubt but it was at home where he was idolised the most, without a doubt. He was very close to the children and they were his priority. We were number one. I’m afraid to say, rugby came a close second but he was a great family man.”

The Foleys have been through extremely tough times but Mrs Foley said that her sons, Tony and Dan, are great, largely thanks to the help of Sister Helen Culhane. Sr Culhane, founder of Limerick’s Children Grief Centre, has helped to initiate conversation within the family about Anthony’s life and death.

“The boys are great thank God,” she said.

“We’ve had a tough couple of years. Two years later I must say we are finally seeing a bit of light again. We’ve had a turbulent couple of years. I desperately needed help. I just needed to know what to do with the kids, what is right and what is wrong and the kids needed support themselves.

“What I love about Helen and all the support team she has, is the way she deals with the children. They go in and they sit down one-on-one and then we’re brought in for the last ten minutes, so inevitably they’ll have spoken about Dad or they’ll have told little stories and then Helen might say something like ‘tell Mam about that great story’.”

Mrs Foley said that the way in which Sr Culhane introduces parents to the conversations that she has privately had with the children has helped her own family to talk about the subject.

“She’s able to unify the conversation so now I’m talking about Dad to the children instead of, ‘Let’s pretend this never happened, don’t mention Dad because everybody’s going to cry’,” she said.

“She’s able to open up the conversation, so for the last ten minutes I’m now talking quite freely to the children about Dad. Then we were able to continue the conversation on the way home in the car and then next thing we’re talking about him morning, noon and night because he comes up in conversation constantly.”

“We always say that Anthony’s book is something that I’m very privileged to have. In the beginning we’d go to bed early at night and we’d say our prayers and then I’d read a few pages from Dad’s book. Their eyes would be wide open. They’d really enjoy this and then inevitably they’d have questions and they’d just love it.”

Now, just over two years after Anthony’s tragic death, Ireland are to face New Zealand in a rugby test match. Just twenty days after their former captain died in his sleep Ireland faced the same side. On that day, in tribute to the former back-row, Ireland formed a figure of eight to face the haka. Mrs Foley recalls this and the remarkable score line, of their first win over the All-Blacks, as a moment that lifted her spirits so soon after her world was turned upside down.

“We were still very much in shock at that stage. A few of us gathered that day in my friend’s house and we all watched it together. We were sitting down and we were watching the haka and it took a few minutes for the penny to drop.

“‘What are the Irish players doing? My god they’re in a figure of eight’ and then we saw that the Munster players were in the front and I went ‘My word, Anthony is very present over in Soldier Field today, this is going to be good’. When they won, that was such an incredible moment for me and the children. That was so, so special.