Home » Family Health » Meghan, go easy on yourself – and stay off the internet! 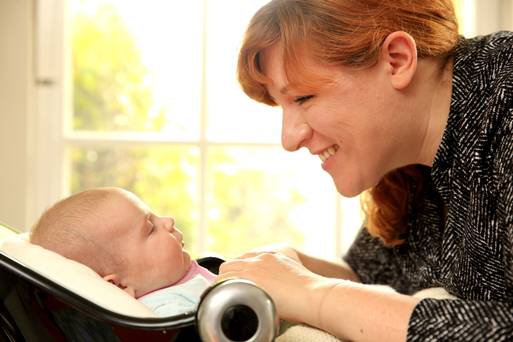 New mum Tanya Sweeney has some hands-on advice about motherhood to share with the duchess as the world prepares to greet Baby Sussex.

It’s safe to say you and I are very different people: my in-laws don’t appear on any currency or in any national anthems, for a start. You could probably fit my whole house into your boot room at Frogmore Cottage. Amal Clooney wasn’t at my baby shower, mainly because I didn’t have one. But we are both navigating New Mum life, which means we probably have more in common than you think.

I am a good 10 weeks in to my parenthood journey – to say it’s been a learning curve is putting it mildly. There are whole areas of my brain that have been shaken to life; chambers in my heart cracked open that I never even knew existed. This, too, is likely to happen to you, so be prepared for the biggest emotional onslaught of your life (yes, even bigger than that wedding). That said, every time I see a woman with a baby bump, I feel like grabbing her by the shoulders and yelling ‘save yourself! Turn back before it’s too late! Get to the cinema while you still can!’. For what it’s worth, I have much wisdom to impart if retaining your sanity is of any interest. Whatever about your crack team of nannies, PRs, stylists and celebrity friends, some of my humble advice might even come in useful. Here’s all the stuff I wish I knew three months ago.

1. Go easy on yourself: the first few days of motherhood are an absolute headscramble. The euphoria when you have finally given birth is swiftly followed by a maelstrom of other emotions. There’s the sobering reality of caring for a tiny baby; the bittersweet elation at getting your body back to yourself; anxiety that there are so many things that could potentially go wrong with a newborn baby. Add in a blizzard of hormones, and it’s pretty much like the first day of a new job, except with a raging hangover. Just count yourself fortunate that you’re not on a public ward, as I was. Honestly, I was expecting a sort of collegiate chumminess on my maternity ward. I thought we’d be nipping in and out of each other’s cubicles for chats, tips and camaraderie; like Malory Towers, but with catheters and lactation consultants. Instead, women busied themselves with their new bundle, fought through the fog of visitors, or cried silently with pure overwhelm. Oh, and let’s not forget the dawn chorus of four screaming babies at any given time. It was absolute mayhem, so consider yourself properly spared.

2. There are a couple of things no one tells you about: whether you give birth through the sunroof (C Section) or the piping bag (‘natural’ birth), you will bleed like you’ve never bled before. It scared the absolute life out of me, but don’t be alarmed! It’s perfectly natural. Also, every new mother cries their eyes out on Day Three. Something to do with hormones. No exceptions. Sorry.

3. Like me, you are classified as a ‘geriatric mother’ (although I was 42 to your 37). Is it harder being an older mum? Perhaps. Not only are you physically wrecked from the sleepless nights, but you’ve spent so many years carrying on to your liking and being answerable to no one. Plus, all the public scaremongering about older mums and birth complications/defects often mean you can’t quite believe your outrageously good luck when you have a healthy baby (though you’re convinced the universe will somehow have it in for you down the line). And after you’ve been good at so many things in life, like career or travel, paying rent or general adulting, it’s a real shock to be emotionally capitulated by a tiny baby.

You’ve probably heard of so many mums finding it difficult to cope, and like me, you were probably convinced that you know better than all of them and would kick ass at motherhood. Don’t be too hard on yourself if you find you’re flailing just like them.

4. This is a biggie – keep off the internet. I have a hunch that you might already give certain pockets of the web a wide berth, but know this: Google is the quickest way to give yourself a spike in anxiety. Look hard enough and you’ll find that there are 7,345 ways to inadvertently harm your baby, and there are twice that number of ailments that they are susceptible to. My partner gets annoyed when I start sentences with “I read on a parenting messageboard…” It may seem like a treasure trove of wisdom, tips and intel, but nothing beats your own instinct, and coming off your smartphone and getting to really know your own child.

5. I may not have the world’s press getting in a huff because I didn’t adhere to ‘protocol’ about publicly presenting my baby to them, but I did have my fair share of visitors. It’s very simple; everyone adores a box-fresh baby. They don’t care about the bleeding, or the cracked nipples or the hormones – they’ll do anything to smell a newborn baby’s head. I had visitors every single day for the first six weeks of my daughter’s life. I was overwhelmed by their generosity. The bubble of love that my friends and family had for this newcomer has been one of the best experiences of my life. You’ve not lived until you’ve seen your brothers melt with emotion over your child after decades of being slagged to death by them (though I wouldn’t hold out on Samantha doing the same, tbh). But I wish that instead of being a people-pleaser and welcoming visitors every single day, I’d arranged two ‘meet the baby’ afternoons, where I would get the whole visiting fandango over and done with on two occasions. And beware the visitor who tosses a Penney’s babygro at you and sits bovine on your sofa for three hours while you serve them tea and cake and ignores your hints about needing a nap.

6. I hope you’re lucky enough to get a good sleeper, though I do have one golden routine that guarantees a good four-hour sleeping jag: a warm baby bath, followed by a nice big feed (look for eyes rolling in the back of the head), followed by some white noise, and a cosy sleep-sack. You might even get to catch up on Fleabag if you’re lucky.

7. Don’t sweat it if breastfeeding doesn’t work out. When my daughter was six days old, I gave up breastfeeding despite taking a few very determined runs at the mountain. Despite having my lactation consultant friend Lisa pummel my boobs until we took our friendship to an entirely new level, I was completely consumed with guilt over switching to formula. Some friends reminded me to save my energy for fights over chicken nuggets and chocolate down the line. And, as any lactation consultant will tell you, fed is best. It will likely have no bearing on the baby’s Leaving Cert results (not that Baby Sussex will have to worry about that).

8. Even if you have an army of nannies (which I do not), people will probably offer to babysit, mainly out of politesse. Call them on it and dial those favours in! Make sure that you and Harry enjoy some date nights on your own and get your baby used to being around different people. It takes a village. And while on these lovely date nights, try not to mention Baby Sussex’s dirty nappies, or sleep schedule, or runny nose. It’s all deeply unsexy, don’t you know.