Home » Family Health » Liz Kearney: 'Storytime may be a tired tale of woe – but its value to children is undeniable' 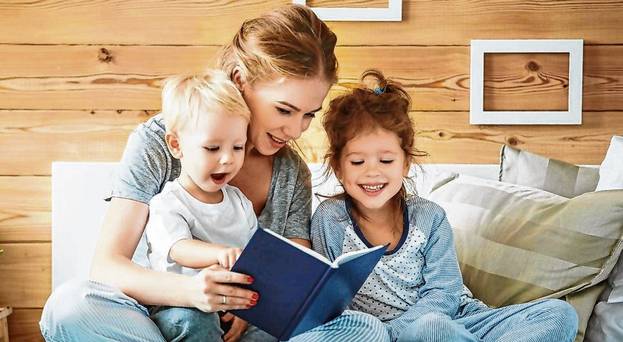 Before I had kids, I always imagined that the best part of the day would be bedtime, when I’d get to cuddle up with them over endless stories.

I love reading, so I used to picture us all cosied up together under the covers, book in hand, little faces rapt as I acted out the silly voices in an assortment of much-loved fairytales.

We’d all laugh along together like the happiest of families in some soppy Hollywood movie, and then I’d tuck them in for the night and they’d sleep peacefully and soundly for a full eight hours.

But now that I actually have two little boys, it turns out that bedtime bears little resemblance to any Hollywood film, except perhaps something from the disaster genre.

To be fair, neither child goes to bed without one parent or the other wading through three or four picture books for the younger one, or several chapters of Enid Blyton or Roald Dahl for the older one.

But I would be lying if I said that I love storytime as much as I thought I would. Because bedtime typically comes at the end of a long working day, when energy supplies are low and all I really want to do is go back downstairs, eat some dinner, watch ‘The Crown’ and then go to bed.

On the face of it, I might be narrating the tale of ‘Pip and Posy: The Super Scooter’ or ‘Moomintroll and the Birthday Button’ for the billionth time, but internally, I’m narrating a much angrier script. What time is it? Is it after eight? Shouldn’t they be asleep by now? Will I ever get to eat my dinner? Why can’t the oldest one read to himself yet? What’s the point of all this reading anyway? And what on earth is a Snorkmaiden?

And it’s not just working parents, I don’t think, who feel too worn out for storytime. One friend, an endlessly patient stay-at-home mum who adores the busy daytimes with her kids, says she has always found bedtime a total nightmare.

“By that stage, having been with them all day, I’ve just had enough,” she told me guiltily. “I just can’t cope with any more engagement and I feel like it’s time for me to have a bit of me-time.

“The second the older ones got big enough to read to themselves, I put an end to bedtime stories. That moment couldn’t come soon enough for me.”

If any of this sounds familiar to you, you will be happy to hear that Google is here to help. This week the tech firm announced that it has invented a new device, which means that you can read your kids a story without actually having to be there in person.

Its new storytime app allows parents to record themselves reading their kids’ favourite books – funny voices and all – and then play it back later on, in their absence.

Rather poignantly, the device was developed to assist an American military family, where the father was serving in Afghanistan for long periods. So he taped himself reading ‘The Wind in the Willows’, so that his children could listen to his voice even when he was thousands of miles away.

The app’s usefulness for most families, presumably, will be when Dad has promised to read that night’s story but then finds himself caught in a 10-mile tailback on the M50, or Mum is trapped on the far side of St Stephen’s Green by a tractor blockade and a group of angry farmers and won’t be back home before 9pm.

But now it won’t matter. Provided someone is there to press play on the laptop – and surely the kids can figure this part out for themselves by the time they’re three or four – then you don’t need to be there at all.

It’s hard not to feel sad about all this, particularly in a world where the average working parent spends just over an hour of quality time a day with their kids; and child development experts write bestselling books called ’15-Minute Parenting’, which pretty much says it all.

But it is probably time to remind ourselves that reading to our kids really does bring them benefits, even if it might not feel like it at the time.

Beyond the language and literacy skills which they acquire through reading with a parent, a study by American researchers last year found that extensive reading to very young children – from birth to the age of five – resulted in fewer behavioural problems at age three.

The study authors found that interactions between parents and children around storytelling could potentially curb aggression, hyperactivity and difficulty with attention.

Why? “Maybe engaging in more reading and play both directly reduces kids’ behaviour problems because they’re happier and also makes parents enjoy their child more and view that relationship more positively,” one of the researchers suggested.

These benefits had less to do with the actual act of reading, the researchers suggested, than the interactive ‘back and forth’ nature of storytime with your kids, and the closeness that it brings. And that’s something that an app, no matter how advanced, just can’t replace.