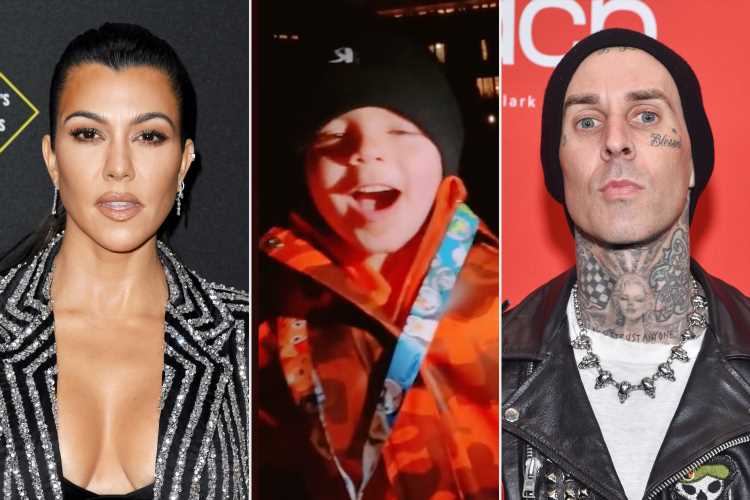 Kourtney Kardashian and Travis Barker's kids are spending some quality time together.

In a video posted to Barker's 15-year-old daughter Alabama Luella's TikTok feed on Thursday night, the Blink-182 musician was joined by girlfriend Kourtney Kardashian and her two children — Reign Aston, 6, and Penelope Scotland, 8½ — for the viral "Pass the Phone" challenge.

Also along for the game, which seemed to take place during a joint ski vacation, Alabama, her 17-year-old brother Landon Asher and Atiana De La Hoya, the 22-year-old daughter of Barker's ex, Shanna Moakler, who is Alabama and Landon's mom. Next, Kardashian, 41, said, "I'm passing the phone to my boyfriend," before handing the device over to Barker, 45.

Viewers learn funny facts about the rest of the participants, like that Landon (who's wearing a tampon in one of his nostrils) "can't get off a ski lift," Barker "wiped out while snowboarding and can't walk" and Atiana is on her "second hair-dye fail."

"I'm passing the phone to somebody who talks 24/7," Kardashian said near the end, panning the camera to son Reign, who demanded, "Pause it!" before letting out a guttural yell.

"Okay, we're done," Kardashian (who's also mom to son Mason Dash, 11, and shares all three of her kids with ex Scott Disick) told Reign with a smile as he danced, yelling, "Atiana! Dork, dork, dork, dork!"

In January, a source confirmed Kardashian and Barker's relationship to PEOPLE and the couple made it Instagram official over Valentine's Day weekend, long after they first bonded over their kids.

The drummer raved about his relationship with Kardashian last month on The Drew Barrymore Show, explaining that it's much easier dating a fellow parent.

"I'm spending time with a woman who's a great mom, who's a great friend and you don't have to worry about any of those things," Barker said. "It just comes natural — it's like a maturity thing."

"And I also really like missing someone and cherishing the time that I spend with them instead of every day being with them, especially in the beginning of the relationship," he added. "I think missing someone is so important."