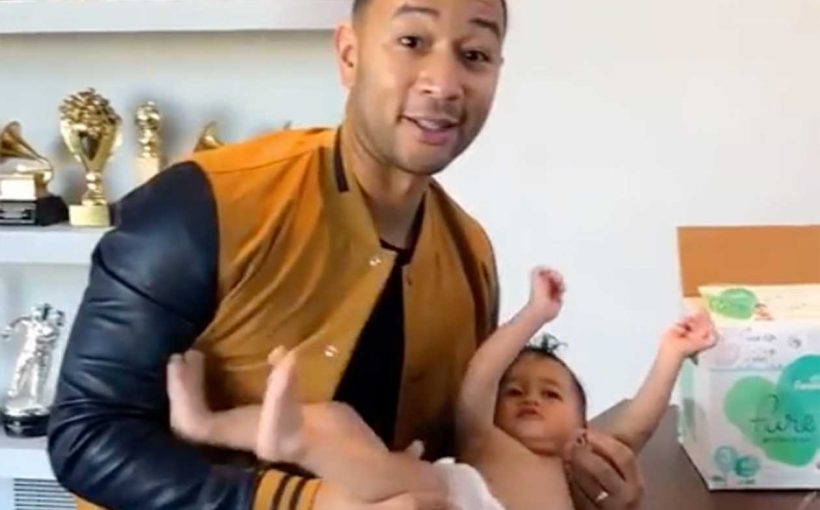 John Legend is using his own fatherhood experiences to help make a difference in the world.

As a working father of two, Legend, 40, understands how difficult it can be to change his kids’ diapers in public restrooms.

That’s why the musician — who shares son Miles, 13 months, and daughter Luna, 3, with wife Chrissy Teigen — recently teamed up with Pampers to help install 5,000 changing tables in men’s restrooms across the United States and Canada.

Opening up to PEOPLE about his decision to work with the brand, Legend says it came about naturally and was a no-brainer.

“It all started from an organic situation which was that Chrissy and I both shared diaper-changing duties with Luna,” explains Legend, who previously collaborated with Pampers in February for a Super Bowl ad about dads on diaper duty.

“We really started getting behind the idea of dads having diaper duty and that being a part of co-parenting,” he continues. “Then Pampers and Koala Kare came together to say, ‘You know what? We’re encouraging dads to change diapers and be active parts of the parenting duties, but a lot of times, the facilities aren’t built for that to happen.’ “

And though Legend has had his fair share of obstacles when it comes to diaper duty, he admits to feeling surprised that it took so long for men to be included in the conversation.

“It didn’t occur to me that [including dads in advertising around diapers] hadn’t happened yet … but I’m glad that we’re highlighting this issue,” he says. “Overall, it’s part of a movement that we recognize [the] duties of parenting and running the house should be shared more equally between partners.”

“We want to make sure that we do our part to make that message heard,” Legend continues. “I think making the changing stations available is gonna make a difference for a lot of people.”

The “All of Me” singer notes that many dads — himself included — are often forced to “improvise” when it comes to places to change their kids’ diapers.

“[For me], sometimes it’s on airplanes. A lot of times, they’re not built for it,” he shares. “You just find a spot and you want the kid to be comfortable because some of these spots are hard and uncomfortable, and they’re freaking out.”

“You just wanna get it done in any way possible, by any means necessary,” he adds.

Aside from changing diapers, Legend also has his hands full raising his two kids with Teigen. Luna, in particular, has kept the couple busy and on the same page about co-parenting.

Though she may be young, Legend reveals his elder child is already figuring out what she can get away with and attempting to outsmart her parents.

“It’s about setting boundaries … and saying there are trade-offs in life,” Legend says of sharing disciplinary roles with Teigen, 33.

“Obviously, Luna has become good at negotiating already,” he continues, referencing a recent video of Luna negotiating with her mom over candy. “We want to let her know that when you make this choice, this is what the consequence is going to be. I think we try to stay on the same team, so she doesn’t play us against each other.”

The father of two also notes that his daughter is in a new stage of “toddlerhood” and beginning to understand a lot more, especially after their recent family trip to Europe.

“She was really aware of what was going on and able to take it in more and truly enjoy it. It was a new milestone in our vacationing,” Legend explains.

“She was really aware that we were in a new place and enjoying the culture,” he adds. “She’s just much more smarter and able to enjoy the trip more than she ever had before.”

Miles, meanwhile, may not be as aware as his big sister just yet, but he’s certainly making strides of his own.

“He’s already talking a little bit,” shares Legend, adding that his son is getting ready to walk. “He’s so close, he’s grabbing everything. He’s been half-crawl, half-walking … but I think the walking will come soon.”

Overall, Legend says he’s embracing his role as a dad. “I’m proud of who we are as parents and I’m proud of our kids,” he says.