Home » Family Health » How I Parent: A Single Mom of 2 Shares How She Raised Both Kids Without Their Fathers 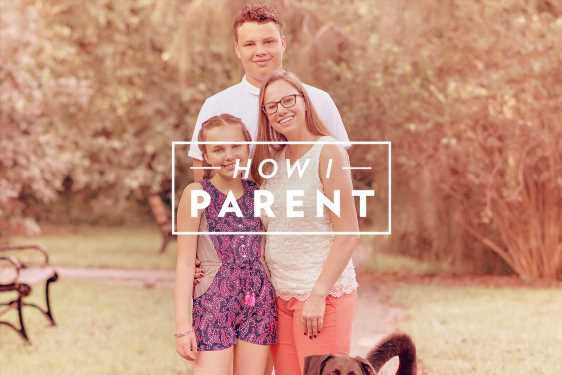 Name: Rachel Fawcett
Location: Wilmington, Delaware
Occupation: Paralegal
Family situation: Single with two kids: Mikhail, 16, and Grace, 14. I’ve raised both of them myself.
Parenting “philosophy” in a sentence: You are your child’s biggest advocate.

What was your journey to having the family life you have today?
After I finished high school, I started waiting tables. I thought about going to college but I wasn’t necessarily motivated, so I picked up a job while I figured things out. Then two weeks before I turned 19, I had my son, Mikhail. My son’s father and I were briefly together before he was born but it didn’t work out so Mikhail never got to have a relationship with him and that was tough for both of us. Thankfully, I had a lot of support from my mom and stepdad. We lived with them but it was hard having a child and not having a partner.

At the time, I was so focused on parenting Mikhail that I blocked everything else out. I was sad about how things went down but at that point, all I cared about was giving my son everything he needed financially, emotionally and physically. Once I realized that my job wasn’t going to help me enough, I decided to go back to college to pursue a bachelor’s degree in paralegal studies. There was also a nonprofit organization in Delaware that provided free child care for single, divorced or widowed parents, who were full-time students, so I was lucky enough to enroll my son. The program caters to working adults so I would leave Mikhail at daycare during the day and my sisters would watch him at night.

Even though Mikhail didn’t have a relationship with his father, he did grow up very much like a normal child. My mom and stepdad had a major role in helping me raise him so he could have a proper foundation. Mikhail is also biracial — I’m white and his father is black – and I knew within our family that he wouldn’t have to deal with any issues regarding his race because we’re very diverse. My stepdad is black and I have biracial nieces and nephews. He’s always felt accepted at home but to be honest, most people think he’s white because he has blue eyes and light skin. For a while, he went to a small Catholic school but eventually I decided to put him in public school, where it was much more diverse. It wasn’t just that I didn’t want him to feel like one of the only minorities at school, but I thought it would be great to experience a bigger school so he could see many different types of people, who come from different walks of life. I wanted him to see that not everyone is cookie cutter and being different is beautiful.

While I was still taking classes, I was in a new relationship and got pregnant again at 21 with my daughter Grace. But two years later, her father and I split and I’ve been pretty much single ever since. When Grace’s father and I broke up, it was really difficult and we were both very upset. He used to come get Grace every other weekend to try to keep their relationship close but unfortunately, he ended up having other priorities that took his focus away. Eventually, he stopped including her in his life, so that was very traumatic for the both of us. The whole situation wasn’t easy but it eventually worked out.

I loved being in school and I graduated in 2008 with honors. My kids got to see me graduate, which was huge for me. Even though they were both young, I wanted them to see that anything is possible if you put your mind to it. It was so special that both of them could be there.

How did your upbringing influence your parenting style?
I grew up in a two-parent household. I have three sisters and a brother and my parents always put us first, though they were the parents and always had final say. But when I was a freshman in high school, my dad died; he needed a liver transplant but there weren’t any available in time. It was really tough on all of us.

After that, my mom did absolutely everything she could to provide for us. She started loading trucks at UPS so she could get insurance for us and she would start work at 3:00 a.m. so she could be home with us during the day. There were also a lot of other people who stepped in to help us at that time; we always had someone around to be with us and to take care of us. Watching everyone come together during our time of need was probably one of the biggest things that shaped me as a person. That’s very much how I operate now.

What’s your favorite thing about parenting?
I love watching my kids grow as individuals. I love that my son and I both have a very dry sense of humor so we can joke around with each other and enjoy each other’s company. My daughter is such a free-spirited child and I absolutely love hanging out with her. She’s always been the type to try new things — art classes, soccer, softball, you name it. I’m so very proud of who they’ve become and I’m excited to see what’s next for both of them.

What’s the hardest part?
I would say the hardest is protecting them from the outside world. I don’t mean sheltering them but more so helping them understand why things are the way they are. I’m an advocate for them in completely different ways. In middle school, Mikhail was very disorganized; he would do his homework and forget to hand it in, things like that. I would meet with his teachers so we could work as a team to figure out what was the best way to help him stay on top of things.

Grace is a little different because she has ADHD and suffers from anxiety. Every year I collaborate with the school and her teachers so we can plan out the best course of action for her, and I can help them understand her needs. It’s also tough watching her struggle socially. Growing up, I had people give me a hard time in school so it was heartbreaking for me to watch her go through the same thing. However, she’s very open with me and knows she can come talk to me about anything. Overall, I’ve tried to teach my kids that life isn’t always going to be easy but it’s important to always do the best you can.

What’s your trick for achieving balance when things get crazy?
Well, from the time I became a parent, and even prior to that, everything’s been unpredictable. In the past, I tried to control everything so I could protect my kids and keep them safe. But then I realized: You can’t be in control all the time and you have to roll with what you’ve got. You have to accept your circumstances and adjust. I learned to let go of my expectations so I could face what was in front of me and move forward on a new path.

What’s the best advice you can share with new parents?
I would say, always be your child’s biggest advocate. Be that person who is in their corner, supporting them no matter what. Also, love and accept who your children are. They’re their own individual people with their own personalities and their own journeys so it’s important to recognize that and give them the unconditional love they deserve.

What would you want your kids to say about you as a parent?
I would want them to say that I was always supportive and that I’ve provided a good life for them. I want them to know that I’ll always love them unconditionally and I’ll always be there for them, no matter what.