Home » Family Health » Granny as nanny: What's it like when your mum moves in? 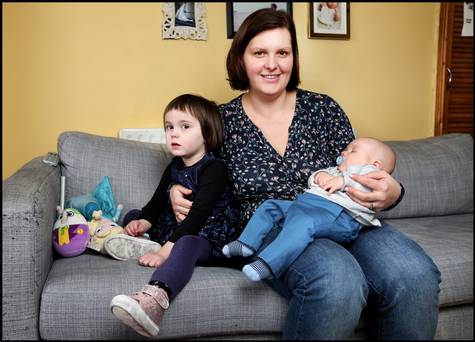 Meghan Markle has been accused of a lot of things – pestering aides with 5am text messages, a touch of high-handedness with staff, even a pinch of diva behaviour about tiaras – but her latest decision is sure to win her quiet admiration.

By moving in her mother Doria Ragland to help with her baby, Meghan has given the practice her royal imprimatur.

And while it’s hardly the case that royal mothers never have help – staff are hired from Norland College, the brown-uniform-clad Norland Nannies – there is something decidedly more ordinary about the Meghan option.

Most new families do not enjoy the luxury of a private pile or ‘cottage’ as Frogmore is euphemistically known, so adding a parent into an already emotionally-charged situation can prove trying. And so it was when Aleksandra Dempsey asked her mother, Grazyna, to stay when she got pregnant with her second child.

“With my first one, we didn’t think about it that much. It’s much easier with a first child. But with the second, I was worried that I would go into labour early, in the middle of the night, that I might need an emergency C-section. Then you have another child to consider,” she says. Her daughter, Andrea, is four.

“So after we got pregnant, we thought about it for a while and took a holiday in Poland shortly after. We had to decide which of the mothers to ask, but Michael’s mum lives on a farm, so we didn’t think that would be fair.” Then there are the practical arrangements.

Aleksandra and her husband, Michael, live in a two-bedroom apartment in Dublin. Grazyna lives in Poland. When Aleksandra gave birth, she was two weeks overdue, by which time Michael had already used up his paternity leave. So Grazyna’s arrival was welcome. There were, however, still niggles.

“I have to say, it was difficult,” Aleksandra admits. “We live in a tiny two-bedroom apartment – the children sleep in the other room. So my mum slept on the couch for a month. She agreed to do that. It was a bit of a mess though. And she doesn’t really speak much English. She does get on with my husband, and he speaks a little Polish. If they’re having a conversation, I will translate.”

Aleksandra (39) is perhaps more honest than a lot of women with their mothers. And maybe that helped the situation to work.

“It was a help, but it was also a risk. I told my mother ‘if I’m fed up with you after two weeks, you have to go home’. So she got a one-way ticket from Poland because neither of us knew how it would go. Sometimes parents can be overbearing.

“In the end, we got on pretty well. It was great to have someone to help, to cook dinner or clean up the house. She would say to me: ‘Aleksandra, your windows look dirty. How about I clean them?’

“So I was like, ‘Super’. The last thing on your mind is cleaning the windows. All that stuff was great.”

The Meghan message may encourage new mothers to ask for help.

Whereas previously, families lived close to their parents and regularly availed of their support, a more mobile and urban-centred population now means that is not always possible.

Laura Erskine, who presents the podcast Mum Truths and has three children aged nine, seven and two weeks, says there is more pressure on Irish mothers than ever “to be seen to be coping”.

“The pressure is really from watching other people,” she says. “It’s not from celebrities – whom you always assume have night nurses and doulas – but from friends and influencers. You see them and they have their make-up on, their hair is done, they’re out getting their figure back. We try to do too much too early. We don’t let our bodies recover and our hormones settle down. It’s all about being the best mum you can, including bouncing back. But we shouldn’t be feeling guilty about not taking visitors and not [going] out and about, or at least seen to be.”

Laura raises an important issue – the average first-time Irish mother is now over 31 and while ageing grandparents may well be willing to help, they may no longer be capable of many childcare duties. “It’s a great idea, provided you get on with them, and provided they’re still around,” says Laura.

“We’re having children later in life than ever before. For example, my mum is very well intentioned and would love to help, but she’s 81. She wants to enjoy the grandkids rather than be involved in that way. She’s made it very clear that her role in raising children is over.”

Many Irish women enjoy a candid, if sometimes volatile, relationship with their mothers. Which is fine – fun even – in measured amounts, but perhaps not sustainable over long periods.

“Do you get on with them or not? Because motherhood is an emotional rollercoaster. There’s a lot of hormones for the first six weeks. If you don’t get on with your mother or mother-in-law, can you cope with that,” asks Laura.

“Then, do you have the space? So many of us live in apartments – you might not physically have the room.”

But research shows mothers do better with more social support. Dr Anne Kehoe is a clinical psychologist and member of the Psychological Society of Ireland. Her doctoral thesis examined stress in parents of newborns. She says that having an extra pair of hands can be beneficial and not just for domestic chores.

“There is research to show that those becoming parents or expanding their families cope better if they have good social support. Overall, it can reduce the stress on them.”

It can also alleviate some factors that impact postnatal depression.

“One of the contributing factors in PND can be a lack of a support network. Sometimes you can have the best and biggest network and still suffer from it. Some factors are internal, some are external,” says Dr Kehoe.

However, she counsels that adding another dynamic to an already challenging time must be carefully managed.

“Moving in a grandmother could bring challenges. For example, some of the advice given to new parents has changed over the years. Grandparents may have been told to put their babies to sleep on their front and the current advice is to put babies to sleep on their backs. Grandparents may be used to running their own homes and the change to being a guest in someone else’s can be difficult.

“If a grandparent was to take over or undermine a parent’s relationship with their new baby, or with each other, this might not be helpful.”

But what about the relationship? Can sleep-deprived and possible tense new parents cope with another individual living in their space?

“It can be destabilising. Any new person in your house causes a change. A nanny or any kind of staff will change the dynamic. Even a new baby changes the dynamic. You have to ask, do the advantages they bring balance out the disadvantages?”

There will always be those for whom partners and in-laws prove a toxic mix.

But for others, Meghan’s decision will hopefully open a conversation about asking for help. And in that, she has done new mothers a big favour.