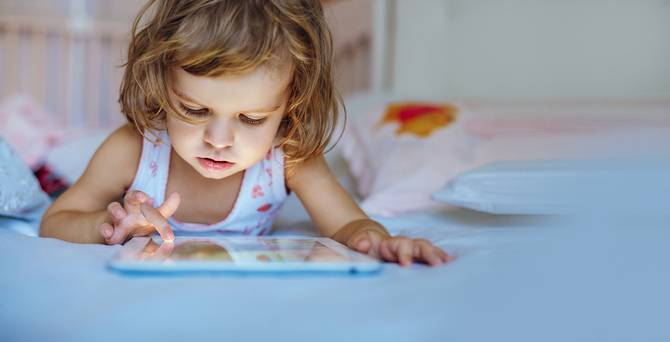 Children’s sleep is barely affected by the amount of time spent staring at screens, claims a new study by scientists at the University of Oxford.

Researchers found that screen-time had little impact on how much sleep children get, casting doubts on previous studies that claim excessive use of gadgets is to blame for up to 90 per cent of school-age children not getting enough sleep.

The scientists from the Oxford Internet Institute at the University of Oxford, said the relationship between screen-time and sleep was at most “extremely modest”.

The study, published in the Journal of Pediatrics, found that every hour of screen time was linked to 3 to 8 fewer minutes of sleep a night. The scientists concluded that this correlation was too small to make a real difference to a child’s sleep.

Professor Andrew Przybylski, author of the study, suggested parents need to look at other variables, such as what children do before bedtime, to help improve sleep patterns.

“Focusing on bedtime routines and regular patterns of sleep, such as consistent wake-up times, are much more effective strategies for helping young people sleep than thinking screens themselves play a significant role,” he said.

Professor Przybylski criticised the small sample sizes of previous studies which have blamed increased screen-time on poor sleep of minors.

He said: “Because the effects of screens are so modest, it is possible that many studies with smaller sample sizes could be false positives, results that support an effect that in reality does not exist.”

Oxford scientists used data from the United States’ 2016 National Survey of Children’s Health, where parents in the US completed surveys about sleep patterns of children in their own households.

Professor Przybylski added that more research needs to be done to find out if there are any biological mechanisms that are affected by digital screens, amid claims excessive use of devices may not affect sleep patterns at all.

The findings follow a study in August that found that “blue light”, the wavelength of light emitted from digital devices, triggers the production of a toxic chemical that kills light-sensitive cells in our eyes.

The resulting damage can speed up macular degeneration – a condition that affects the middle part of vision. Around one in seven people over 50 have some signs of the disease and there is no known cure.

Dr Ajith Karunarathne, the author of the study from the University of Toledo, said: “We are being exposed to blue light continuously, and the eye’s cornea and lens cannot block or reflect it.”

Blue light has more energy and a shorter wavelength than other colours which is why it can cause more damage.

The University of Toledo research team said people should avoid using digital devices in the dark because this can dilate pupils and cause more blue light to enter the eyes.