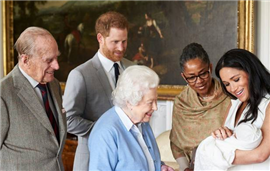 It was the celebrity choice of buggy of the noughties.

Once Sex and the City’s character Miranda was seen strolling around Central Park with one in 2001, sales rocketed.

Madonna had one, as did Gwyneth Paltrow, Elton John, and Victoria Beckham. And it soon became ubiquitious in Ireland too – the “Bugaboo brigade” grew with the Celtic Tiger.

But more recently, brands like the Uppababy Vista and the Nuna Demi Grow have served up stiff competition for the bugaboo.

However, a bolt from the blue came last month, when reports suggested that Meghan Markle had been gifted a Bugaboo Fox Classic by a friend (rumoured to be Amal Clooney).

Bugaboo’s creator was again celebrating, and he admitted he was hoping for the so-called “Meghan effect” to take hold.

“I’ve been crossing my fingers hard and when I heard they might have one, I was really happy,” Max Barenbrug, the Dutch inventor of Bugaboo, told the Telegraph.

Meghan reportedly pushes baby Archie around the grounds of Frogmore Cottage in the Bugaboo Fox Classic model, just as Pippa Middleton treads the pavements of west London with one. Hand-stitched handlebars and eco-friendly fabrics have made it a celebrity favourite again.

So has the Bugaboo once again become the buggy du jour in Ireland?

“Bugaboo was the top seller, then it was Uppababy and Nuna Demi grow,” explains a manager at Tony Kealy’s.

“The Bugaboo has had a resurgence because they’ve given them nicer colours and there are new models – they’ve done a lot of research and development,” he added.

A standard Bugaboo Fox with an aluminium chassis starts at €1,149 in Tony Kealy’s. The “melange” range in blue and grey colours is €1,184, while the buggy jumps to €1,209 for a black canopy and black chassis.

Mothercare reports that the Bugaboo Fox is its fifth best seller.

The iCandy Peach Beluga (€1149.99) reigns supreme, while the Silver Cross Wayfarer Camden (€799.99) follows in second place, despite Meghan’s taste for the bugaboo.

Irish charity shop that’ll stock a buggy due to health and safety reasons, much like they don’t stock children’s car seats or toys.

On Done Deal however, second hand Bugaboo Fox’s are going for around €1,000.