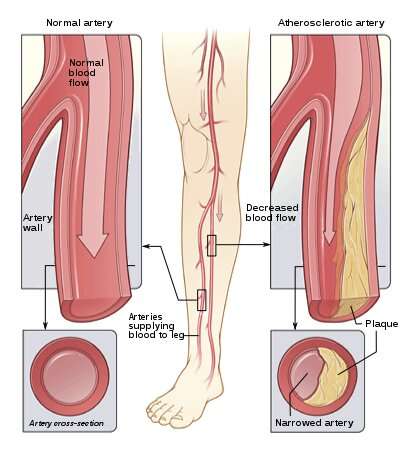 Peripheral artery disease (PAD)—a narrowing of the arteries serving the legs and feet —affects as many as 12 million Americans and 200 million people worldwide. It is a manifestation of clogged arteries, but until now, scientists lacked information about why some people with the disease presented with problems with their legs, some with their heart and some with strokes.

A large national study with significant Vanderbilt participation, published July 8 in Nature Medicine, may help explain why. The research team studied the genetic characteristics of 31,300 people with PAD and identified 19 genetic markers, 18 of which were previously unreported.

The study includes contributions from Matthew Freiberg, MD, Dorothy and Laurence Grossman Chair in Cardiology and professor of Medicine; and Joshua Beckman, MD, MSc, professor of Medicine. For the study, the Vanderbilt participants created a tool that better defines who has the disease in order for other researchers to confirm the initial findings, Beckman said.

“What this says is that there may be genetic underpinnings as to why people will present with leg symptoms first rather than heart symptoms first,” Beckman said.

Atherosclerosis, or an artery clogged with plaque, is most often associated with heart attacks and strokes, but PAD is another common manifestation. It occurs when fatty deposits build up in the arteries supplying oxygen and blood to the legs and feet. The entire circulatory system, including the heart and brain, are at risk when arteries are blocked and narrowed. The reduced circulation in PAD is associated with limb problems ranging from pain with walking to amputation and requiring revascularization.

The study’s scientists, eager to learn more about the potential genetic signatures of the condition, found a unique resource in the Veteran’s Administrations Million Veteran Program.

Beckman said it provided the largest available biobank of people with PAD, including nearly 5,400 African American veterans and about 1,900 Hispanic veterans. It provided an additional 212,000 controls. It is “an unbelievable opportunity,” he said.