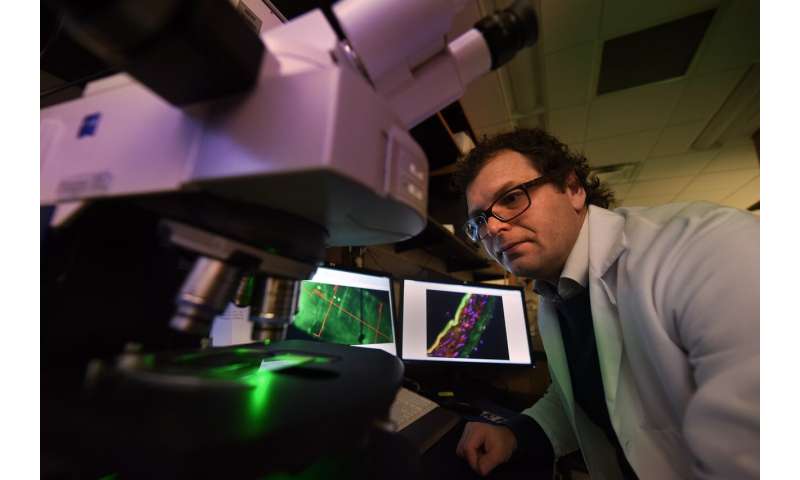 A stroke appears to create a sticky situation inside the blood vessels of the brain that can worsen damage days, even months later, scientists report.

They have found that after stroke, exosomes—nanosized biological suitcases packed with an assortment of cargo that cells swap, like proteins and fats—traveling in the blood get activated and sticky and start accumulating on the lining of blood vessels, according to a collaborative study by the Medical College of Georgia and the University of Oxford.

Like a catastrophic freeway pileup, platelets, also tiny cells that enable our blood to clot after an injury, start adhering to the now- sticky exosomes, causing a buildup that can effectively form another clot, further obstruct blood flow to the brain and cause additional destruction, they report in the journal Scientific Reports.

One thing traveling exosomes typically aren’t is sticky rather, much like our real suitcases, they have a smooth label that marks their intended destination, says Dr. Zsolt Bagi, vascular biologist in the MCG Department of Physiology. He and Dr. Daniel C. Anthony, professor of experimental neuropathology/pharmacology in the Department of Pharmacology at the University of Oxford, are co-corresponding authors of the new study.

But when these external destination tags become inexplicably sticky following a stroke, not only do exosomes not reach their destination, they can worsen stroke outcome, he notes.

In a bit of a perfect storm, the scientists have shown in both stroke models and human blood vessels that exosomes cruising through the blood then pick up RGD, the unique and normally sticky peptide sequence, arginine-glycine-aspartate, which is key to the pileup that can cause additional brain damage.

Platelets normally aren’t exposed to RGD, which should mostly be sequestered in the extracellular matrix, so they become angry, activated and also sticky in response. “There is always a problem when platelets become activated,” Bagi says.

The new stroke study shows the RGD carrying exosomes also target these receptors. In fact, when scientists gave antibodies to αvβ3, the binding to the blood vessel lining was blocked. Conversely, when they exposed a human blood vessel to tumor necrosis factor, which increases inflammation, adhesion increased.

A bottom line of the new work is that RGD sequences are a key contributor to the secondary damage from stroke, says Bagi.

“We can’t prevent the initial stroke, but what we are trying to do is prevent further damage,” he says, which likely makes removing or masking the stickiness a good future strategy. Synthetic exosomes given right after a stroke that compete for the same binding sites or that help internalize abnormal sticky labels, may one day be treatment options, Bagi says.

Normally, few platelets bind to the endothelium, and when they do it’s generally not a good sign. The Oxford investigators have shown increased platelet binding, for example, in the microvasculature of mice with cerebral malaria, a severe complication of the infection that can result in a coma. But just how platelets start accumulating on interior blood vessel walls has been an unknown.

The studies at MCG and Oxford actually started in the blood of stroke patients, where the scientists found this sticky conversion of exosomes and their picking up of now-free RGD, and the findings held in stroke models. Anthony’s lab develops synthetic exosomes, and the scientists used one of these that was both sticky and contained a contrast agent so they could more easily track exosome movement.

“We were able to see they bind and that once they bind, they trap the platelets,” says Bagi. They even watched the exosomes with RGD on their surface, pull platelets out of the blood then stick to the blood vessel lining.

When they put exosomes from an animal model of stroke into a healthy brain blood vessel, platelets started piling up there as well.

Future explorations include whether this process also contributes to the initial stroke in the face of inflammation-producing conditions like high blood pressure or high cholesterol.

Bagi notes that the secondary damage altered exosomes clearly help instigate may in reality be part of an effort to be helpful that goes awry. “I think exosomes are not supposed to stick to the surface of the endothelium but when damage happens they may try to pick up the damage and take it to the liver for elimination,” Bagi says.