Home » Health Problems » In high-risk neuroblastoma, two stem cell transplants may be better than one 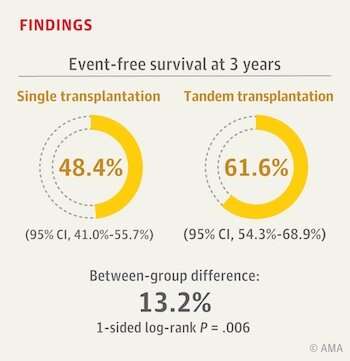 Since the early 1990s, chemotherapy followed by an autologous stem cell transplant has been the standard of care for high-risk neuroblastoma, a childhood cancer that starts in nerve cells outside the brain, especially in the tissues of the adrenal glands, and sometimes the neck, chest, or pelvis. Before children receive chemotherapy to destroy the neuroblastoma, some of their healthy blood stem cells are removed and stored. These cells are later returned, helping the child weather the toxic effects of the chemo.

A study published last week in JAMA supports a new, even more intensive approach for most children with high-risk neuroblastoma: giving not one but two autologous stem cell transplants. In a multicenter randomized trial led by investigators at Dana-Farber/Boston Children’s Cancer and Blood Disorders Center and Seattle Children’s Hospital, the double transplant enabled children to survive longer without new or recurrent disease over three years of follow-up.

Over the course of a decade, Lisa Diller, MD and her colleagues tested and refined the double-transplant treatment. Their promising results led the national Children’s Oncology Group to open a randomized trial in 2007 (ANBL0532) to definitively compare two transplants, given roughly six weeks apart, versus one.

The Phase 3 trial initially enrolled 652 patients with high-risk neuroblastoma, averaging about 3 years of age at diagnosis. Patients first underwent surgery and six cycles of high-dose chemotherapy. After completing this phase, 355 patients were eligible for and consented to enter the next phase—which randomly assigned them to receive either two autologous stem cell transplants or just one. Radiation therapy followed all transplants.

Three-year event-free survival—meaning survival without relapse, progressive disease, or a second malignancy—was significantly better in the double-transplant group (62 vs. 48 percent). About 70 percent of randomized patients went on to receive targeted immunotherapy, now a standard treatment after transplant. Within this subgroup, patients receiving two stem cell transplants versus just one also had better three-year event-free survival (73 vs. 55 percent).

Diller and her colleagues caution that the findings may not be representative of all patients with high-risk neuroblastoma. Nearly half of the original cohort ultimately wasn’t randomized to double versus single transplant. So there might be patients who don’t benefit from tandem transplant that were underrepresented in the study. The researchers also note that overall survival was not statistically significantly different between the tandem- and single-transplant groups, and that the benefit of tandem transplant might not extend to patients treated with different chemotherapy regimens before transplant.

The team presented initial results of the trial at the American Society of Clinical Oncology annual meeting in 2016. Since then, tandem transplant has been considered the standard of care for ongoing and future Children’s Oncology Group Trials.

Emily Coughlin was one of the patients in the trial. She was in the intensive care unit twice during the first transplant; luckily, the second one was a little easier. She has suffered side effects—including loss of kidney function and hearing loss—but now enjoys a good quality of life.

Diller hopes for even better outcomes in the future.