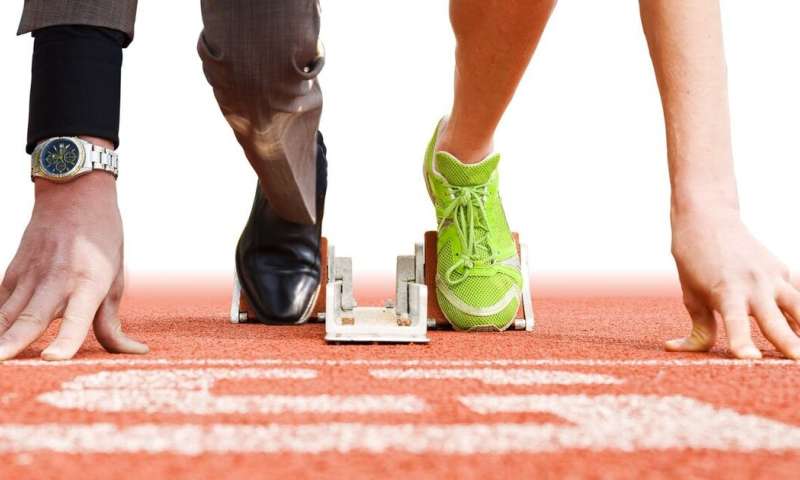 We live in a society obsessed with performance. For both young and old, competitions, awards and rankings are an inescapable feature of life.

How well we do—in the classroom, at work, on the sports field or even in life in general—influences how others see us, but also how we see ourselves. In some cases, this influence can be so strong that we come to see our performance as a key part of who we are.

Our research focuses on this potential identification with how good we are at what we do, and we argue that we need to recognize and better understand what we call performance-based identities.

Why we build identity around performance

A performance-based identity arises when a person not only knows that they excel (or at the other extreme, are completely inept) at something, but feels fundamentally defined by that level of performance. Should they cease to perform to the same standard for any reason, they can lose their sense of self (or a big chunk of it).

Put simply, they’d struggle to answer that age-old question “who am I?” This in turn would raise all sorts of tricky questions about their place in the world, and their purpose and possibilities in life.

Not everyone will develop a performance-based identity, but we’re all potential candidates. This is simply because we all live in a world that constantly tells us doing well is important. This obsession with performance is pervasive beyond the realm of work and formal performance reviews. It is a part of our culture.

A recent survey of the values of more than 80,000 people worldwide found that over 65 percent of respondents thought being very successful or having others recognize their achievements was important to them. We see this focus on performance in all sorts of ways in everyday life. The most popular television shows are all about outperforming others on some activity, be it singing, cooking, creating a home, dating—or even marriage. In politics, voters are increasingly attracted to candidates who manage to portray themselves as “winners,” regardless of how much the evidence justifies their claims.

Not a new phenomenon

While the concept of performance-based identity is new, the phenomenon itself isn’t. About a century ago, the eminent German sociologist Max Weber developed the idea of the Protestant work ethic. He proposed that this religiously rooted drive to work hard was the psychological fuel of capitalism. In the 80s and 90s, Stanford University psychologist Albert Bandura and colleagues produced a mass of research on the origins and outcomes of self-efficacy—what many people (to Bandura’s dismay) know as confidence.

More recently, another Stanford psychologist, Carol Dweck, has garnered a lot of popular interest for her research on “mindsets”—people’s assumptions about the changeability of their own skills and abilities. All these ideas point to the impact performance can have on how we see ourselves, and how we behave.

Yet the idea that people might go so far as to identify with their performance, at a very personal level, has so far eluded researchers’ attention, and recognition in everyday life. We aim to change this with our work, as we suspect that performance-based identities could be an influential part of many people’s mental makeup.

More often than not, we tend to think of performance-based identities in positive terms, and as having positive consequences. Think of the iconic status granted to boxer Muhammad Ali, and his famous “I am the greatest!” poem. Likewise, people usually admire—even envy—the intense self-belief demonstrated by the world’s top CEOs, movie stars and musicians.

It is indeed plausible that performance-based identities have many positive consequences for those who hold them. Defining yourself as exceptionally good at something presumably does wonders for self-esteem and confidence. Such an identity is also likely to provide protection during periods of poor performance or failure. If you and others know you are a top performer, moments of not so stellar performance will be brushed off as temporary anomalies.

Performance-based identities are also likely to inoculate against the well documented “impostor syndrome,” where people discount the role their own skills and abilities played in their achievements, which in turn leads to feelings of self-doubt and inadequacy.

Problems can also arise when people define themselves as top performers, but aren’t entirely certain of this identity. In these situations, people may be upset by even the most constructive feedback on their performance, or avoid helping (or sometimes even sabotage) their colleagues out of fear they’d lose their place at the top of the hierarchy.

Finally, negative performance-based identities—where individuals define themselves not as top performers but as exceptionally poor ones—are also likely to have a range of negative outcomes, such as low self-esteem and avoidance of challenging tasks.