Home » Health News » No, McDonald’s touchscreens are not contaminated with poo So says a British tabloid headline that conjures an image of stool smeared on McDonald's self-order touch screens – you know, those giant screens that people touch just before they eat their cheeseburgers. 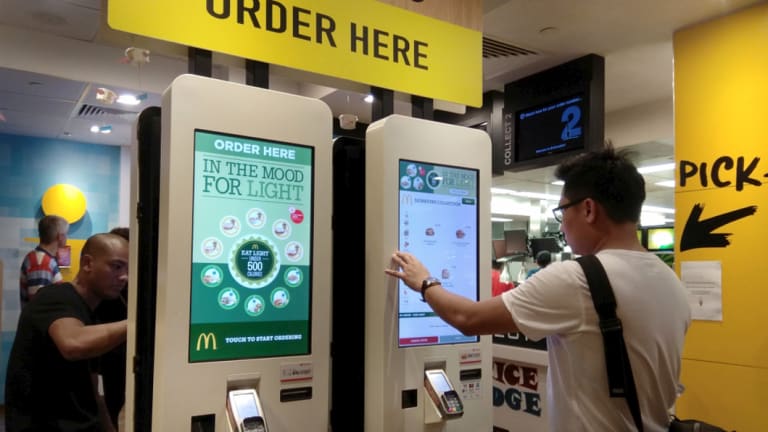 McDonald’s touch screens were tested in Britain and were found to have 10 types of bacteria.Credit:Shutterstock

But the reality is far more mundane, not the public health pandemonium this headline suggests.

No, there is no poo on McDonald's touch screens. There are bacteria, though – a lot of them. These are the same bacteria that live in people's guts, intestines, nose, skin, mouth, throat and, yes, stool. Some live in soil and water.

The article with the aforementioned headline lists the harmful bacteria that were found on the touch screens of several McDonald's restaurants in the London area. It notes the infections and diseases people could get from them.

"These kinds of stories are irritating"

What it doesn't mention is that:

1- Humans, with the trillions of bacterial cells we carry inside and outside our bodies, leave and acquire bacteria everywhere – on doorknobs, lift buttons, shopping carts, trains, anywhere inside a train station and, of course, McDonald's self-order touch screens.

2 – These bacteria are very unlikely to harm a healthy person.

3 – There have been no public health reports about infections caused by filthy touch screens at these McDonald's outlets or any other locations.

"These kinds of stories are irritating," David Coil, a microbiologist at the University of California at Davis, said.

"It's always something: kids' toys, doorknobs, touch screens. These are all the same objects touched by people. Of course there will be human-associated bacteria on them. Washing your hands more or less does the trick."

Coil said that, unless one could determine who touched those McDonald's screens, it would be impossible to determine how dangerous these surfaces were – or if they were even dangerous at all.

The story by Metro, a tabloid newspaper in Britain, was based on research done by Paul Matewele, a senior lecturer at London Metropolitan University. His researchers went to 11 McDonald's restaurants in London and Birmingham and took swab samples from the touch screens.

After three weeks of tests, Matewele found 10 types of bacteria, three of which were harmless, he said.

Washing your hands more or less does the trick.

These bacteria can cause urinary tract infection, pneumonia and septicemia to people with weak immune systems.

They are also known to cause the infections that people acquire when they go to a hospital, Matewele said.

Matewele said his goal in conducting the tests was not to cause panic, who specialises in microbiology and immunology. A lot of bacteria are not harmful. Some are helpful and are part of our immune system.

"I'm trying very hard not to sound alarmist," he said. "These are micro-organisms that you find in humans anyway."

The Metro story makes neither of these points.

Coil does agree with Matewele that bacteria found on the touch screens have health risks, but he said it was unfair to single out specific objects used by a specific business establishment.

The touch screens inside a McDonald's are no more concerning than a doorknob, or the toilet inside the International Space Station.

Enterobacter, the same antibiotic-resistant bacterium found on some of the touch screens, is also present in the toilet of the space station, according to a study published by the journal BMC Microbiology.

These strains of bacteria are not "an active threat to human health but something to be monitored", one of the study's authors said in a statement.

Matewele said he did not intend to place any blame on the fast-food giant and only wanted to raise awareness, especially among people who eat at restaurants or other public places.

"If people know about it, they can do something … They can probably take something like an anti-bacterial cleanser," Matewele said.

In a statement, McDonald's said: "Our self-order screens are cleaned frequently throughout the day with a sanitiser solution. All of our restaurants also provide facilities for customers to wash their hands before eating."