Consuming sugary drinks regularly may increase your risk of cancer, but are sugar-free versions any better?

Last week, a French study of more than 100,000 people found that drinking a “mini” 200 millilitre can of soft drink or sugar-sweetened fruit juice a day increases cancer risk by 18 per cent. 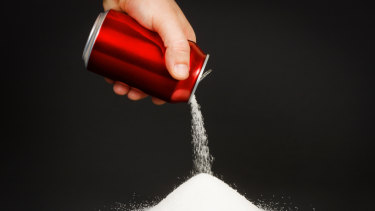 Regular consumption of sugary drinks have been linked with cancer, but artificially sweetened beverages may not be any better.Credit:Shutterstock

In contrast, the researchers found that the consumption of artificially sweetened beverages was not associated with the risk of cancer.

Nearly one in five Australians regularly drink diet or sugar-free drinks and sales of some “diet” soft drinks have overtaken the “classic” versions.

But while consumers think they are choosing the healthier option with sugar-free, calorie-free soft drinks, it may be a classic case of our attention being focused here, to distract from what’s going on over there.

In this instance, while we’re focused on sugar as the “harmful” ingredient, we don’t pay attention to the potential health effect of the ingredients that sugar is replaced with.

“There’s not a lot of evidence around links between artificial sweeteners and cancer risks but they certainly seem to contribute to some negative health impacts so we don’t recommend them,” says dietitian and Cancer Council’s LiveLighter campaign manager, Alison McAleese.

Research from earlier this year found that drinking two or more artificially sweetened beverages a day is linked with a significantly higher risk of stroke and heart disease. Previous research has linked intake with an increased risk for metabolic syndrome and type 2 diabetes.

Artificially sweetened drinks are also as acidic as the sugary ones, McAleese explains, meaning they also contribute to dental erosion.

“And they do seem to have an effect on weight gain,” she adds. “We’re not sure whether that’s because it affects your hunger signals somehow or whether people are thinking because they’ve had the ‘diet’ drink instead of the sugary drink they can overeat later on.”

Public health nutritionist, Rosemary Stanton says it may also be because the sweeteners “act on the brain's control centres… via changes in the microbiome”.

Another possible explanation is that artificial sweeteners, which are as much as 600 times sweeter than sugar, mess with our tastebuds making naturally sweet foods, like fruits and vegetables, less palatable and leading us to reach for more intensely flavoured processed products instead.

But, not everyone agrees and artificial sweeteners are still deemed safe by governing bodies.

Dr Sze Yen Tan, from The Institute for Physical Activity and Nutrition (IPAN), explains that there is conflicting evidence and many studies have either been carried out on animals or are observational in humans.

“There’s an association but we cannot say there’s cause and effect,” he says.

For example, Dr Tan explains that people who have gained weight or who have diabetes may be more likely to choose “diet” or “sugar-free drinks“, which results in the link rather than the drinks themselves being the cause.

A review published in January, commissioned by the World Health Organisation, found there is not enough quality research either way.

Regardless, Dr Tan says we shouldn't think of artificial sweeteners as somehow “healthier”.

McAleese adds: “They don’t contribute anything to your health so it’s better to avoid them.”

For those after a better sugar-free alternative, there is one, she says: “Water.”